Welcome to our Christian bookshelf!
With short stories and books for your edification and enjoyment.
(A couple of books are fiction and are labeled as such.)
Above you will find the buttons for TRUE STORIES I & II. Please place the pointer over one
of these and the stories will appear, then choose one by clicking on it.
​On most Cell Phones the formatting is
not the same. At the top of a cell phone screen will appear the icon with three parallel lines ☰.
Click on this and then STORIES I & II will appear; however do not click on these but on the downward arrows (chevrons) across from the stories.​
Be sure to bookmark this page for future reference! 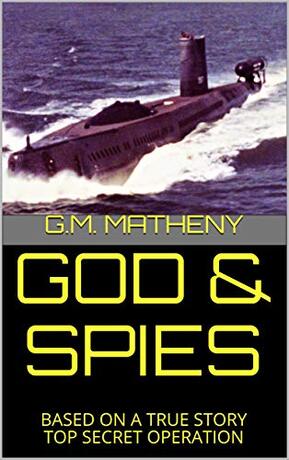 https://www.amazon.com/dp/B07TCSLFWR
​                                                       GOD & SPIES
GM Matheny was a US Navy saturation diver on the nuclear submarine USS Halibut. Involved in "Operation Ivy Bells". America’s most important and most dangerous of the Cold War clandestine operations. If you like good old fashioned American bravado, espionage and American history, you will enjoy this book.
Based on True Events -The Mount Everest of Spy Missions
Firsthand account of history's greatest intelligence coup. Operation Ivy Bells was not a onetime intercept of foreign intelligence, but an ongoing operation of multiple Soviet military channels, twenty-four hours a day, seven days a week, which lasted for years! Another reason for the high interest in our operation was the audacious nature in which it was done—with not one person risking his neck but a whole crew of a nuclear submarine.
How did I end up as a navy diver, four hundred feet down in a frigid Russian sea? After making my dad totally disgusted with me, I set out to make him happy. “Honour thy father”  - I struggled with a decision to serve God. “Lord, I will give my life to you and serve you if you let me make this dive.” But I had the impression He only wanted to know one thing: “What if I do not let you? Will you serve me anyway?”
BOOK EXCERPT
Outside the sub the visibility in the water is less than five feet in the blackness of the frigid sea. Matheny is smiling and looking at the Russian amplifier with its strong signal that made it possible for the taps, when the unexpected happens, and his face lights up in red. This is from a warning light that is on the inside his face mask. He has lost his heliox gas supply and is now on his emergency return bottle with only minutes left to live.
“Topside, Red Diver. I have a red light!”
“Red Diver, return to dive station.”
Sonar man belts out, “Captain, on sonar we picked up a Russian destroyer that is using active sonar pinging into the sea.”
Intercom: “This is the captain; go to all quiet.” Then Halibut’s captain steps over to Main Diver Control and says, “Diving Officer, tell the divers to get out of the water now!”
“Yellow Diver, Topside: Stop whatever you are doing and return to Dive Station!” The master diver then tells the captain, “Captain, Red Diver, Matheny, is already coming back. He had a red light come on in his helmet.”
“How serious is this?” asks Captain Larson.
“He has lost his heliox supply and is now on his emergency return bottle. We’re timing him, but if he goes straight back, he should make it.”
Pings from the Russian destroyer can be heard by the divers and are growing louder. The pings also affect the communications between the divers and Topside.
“Topside, Yellow Diver: What’s the noise?!”
“Yellow Diver, Topside: We have a visitor. Get back in as quickly as possible.”
Red Diver has all 350 feet of his umbilical cable in the water, and the communication box where the tenders are does not work. He has no way to tell them he has a red light or to help him bring in his umbilical cable.
Red Diver reaches the side of the sub and swims up to the top of the Halibut. He goes aft until he reaches the DSRV, which has the dive chamber. He makes it to the first leg of the DSRV but has been dragging all 350 feet of his umbilical cable, which is weighing on him. He then pushes off the first leg of the DSRV but only goes a few feet when his umbilical cord stops moving. Then unexpectedly Red Diver’s umbilical jerks him backward, and with a sharp pull!
“What?” says Red Diver to himself.
The tenders in the dive chamber have received word from the Main Diver Control to bring in Red Diver’s umbilical cable. But while they are attempting this, Red Diver’s cable is ripped out of their hands!
“What’s going on?” one of the tenders asks.
Matheny’s fins have landed back onto the first leg of the DSRV, which keeps him from sliding back any farther. He then pulls toward him about 30 feet of his umbilical cord and makes a dash for the next leg coming down from the DSRV.  The red light is shining in his face reminding him he is running out of time, and the Russian destroyer’s pings are increasing in intensity.
He makes it to the next leg of the DSRV, from this position, he can see the light shining down in the water from the entry point back into the dive chamber. He positions himself to push off this last leg of the DSRV. But then, unexplainably, he is again yanked backward and his face mask slams into the leg of the DSRV. Matheny grabs for this leg and clings to it.

Paperback 273 pages, $12.90 https://www.amazon.com/dp/1075452430
Kindle $6.95 https://www.amazon.com/dp/B07TCSLFWR
What others are saying.
Pastor Marvin McKenzie (February 7, 2018)
“Garry Matheny is a friend and a fellow preacher. Prior to his salvation he served in the Navy as an elite saturation diver. He was involved in one of America’s most important and dangerous clandestine operations."
"Garry does a marvelous job of weaving recently declassified information regarding the operation, the record of an intelligence analyst spending the rest of his life in prison for selling the details of this operation to the Russians and his own eyewitness account of the operation itself."
"If you like good old fashioned American bravado, espionage and history, you will enjoy this book.”
David Meyer (February 26, 2018)
“I could not stop reading once I started. This book is for anyone that likes stories about submarines, divers, spies and or scripture. It’s all there in this interesting book.”
Amazon Customer (March 5, 2018)
“The flow of logic of the whole episode was great. Once I started reading it I couldn't stop.” 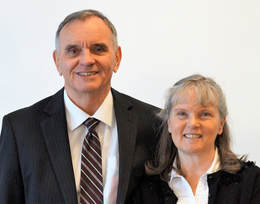 Author Garry and wife Nancy
G M Matheny was a Navy diver on the nuclear submarine USS Halibut SSGN-587 and received the Legion of Merit for a special operation. He is a graduate of Pacific Coast Baptist Bible College in 1979 and has published two books. He and his wife Nancy came to Romania in 1991 with their six children, where they serve as missionaries.
When Jesus Christ died on the cross, there were two other men who died that day. Both had broken the 8th commandment, “Thou shalt not steal”. Jesus took one to Heaven, but not the other. What made the difference? They both believed Christ existed, for they both talked to him, but only one of them trusted Christ for salvation. This was the one who recognized he was a sinner, and deserved the punishment of his crime, for he said, “we receive the due reward of our deeds….” He did not make excuses for his sins but looked to Jesus, the only one who could forgive him, and put his faith in Christ, and asked the Lord to save him. “And he said unto Jesus, Lord, remember me when thou comest into thy kingdom. And Jesus said unto him, Verily I say unto thee, To day shalt thou be with me in paradise” (Luke 23:42-43). Say to Jesus, “Lord remember me, I want to come into your kingdom when I die. I ask you to save my soul, and please forgive all my sins. I want you to live your life in me.”
“For whosoever shall call upon the name of the Lord shall be saved.”  (Romans 10:13)

Glory to God!
All stories, including short stories and books are by GM Matheny. Copyright © 2013, by Garry M. Matheny. All Rights Reserved. All Scripture quotations are taken from the King James Bible. I have tried to italicize only the Bible verses, but there may be a few quotes of others that are also italicized. Bold print or underlining used in verses or quotations of others reflects my emphasis. For the meaning of the Bible words in the original languages, I will be using Strong's Concordance (hereafter labeled Strong’s) with Hebrew and Greek Lexicon, found on the internet.                                      ​
Was Phil Robertson of "Duck Dynasty" judging?