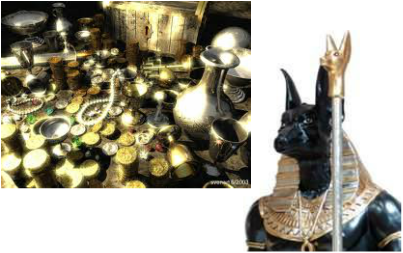 Cursed
The Treasure
of Mount Sinai

(The Story is Fiction.)
All Scripture quotations are from the King James Version of the Bible (KJV).
Non-Biblical quotations will be in italics.
There was a treasure at Mount Sinai.
“[T]herefore now put off thy ornaments from thee, that I may know what to do unto thee. And the children of Israel stripped themselves of their ornaments by the mount Horeb. And Moses took the tabernacle, and pitched it without the camp, afar off from the camp, and called it the Tabernacle of the congregation.”
(Exodus 33:5-7)

This treasure was buried at the Tabernacle.
“And now put thy accustomed ornaments from thee, that it may be manifest before Me what I may do to thee. And the sons of Israel were deprived of their usual adornments, on which was written and set forth the great Name; and which had been given them, a gift from Mount Horeb. And Mosheh took and hid them in his tabernacle of instruction.”
(Targum Pseudo-Jonathan – Pentateuch, Exodus 33, 1892 translation by J. W. Etheridge)

It was the largest treasure in the world!
“And the children of Israel journeyed from Rameses to Succoth, about six hundred thousand on foot that were men, beside children.”
(Exodus 12:37)
“But every woman shall borrow of her neighbour, and of her that sojourneth in her house, jewels of silver, and jewels of gold, and raiment: and ye shall put them upon your sons, and upon your daughters; and ye shall spoil the Egyptians.”(Exodus 3:22, both the women and the men did this, Exodus 11:2)  Six hundred thousand men, plus women and children with ornaments (at least two million), would easily make it the world’s largest treasure.

Chapter One
Recurring Nightmare
Chapter Two
Transitions
Chapter Three
Out on the Desert
Chapter Four
I Was Not Free
Chapter Five
A Sign
Chapter Six
The Valley of the Kings
Chapter Seven
Suspicious
Chapter Eight
“The cat is out of the bag”
Chapter Nine
Meeting My Nightmare.
Chapter Ten
Jesus Delivered Ann
Chapter Eleven
Everyone Gets Introduced
Chapter Twelve
God is Great!

Chapter Three
Out on the Desert

Chapter Four
I Was Not Free

Chapter Six
The Valley of the Kings

Chapter Eight
The cat is out of the bag”

“But they that will be rich fall into temptation and a snare, and into many foolish and hurtful lusts, which drown men in destruction and perdition. For the love of money is the root of all evil: which while some coveted after, they have erred from the faith, and pierced themselves through with many sorrows”
(I Timothy 6:9-10).

Chapter Eleven
Everyone Is Introduced

Newspaper front page headlines
“ISRAEL PAYS OFF HER DEBTS”
“UNEXPECTED CASH FLOW FOR ISRAEL”
Last page of Section C
“Large numbers of ancient Egyptian antiquities are being sold on the open market, with no explanation of who found them or where they were obtained.”