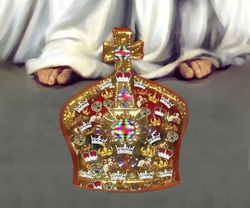 Heavenly Rewards
A true story
There are many verses in the Bible about earning rewards. Salvation is a free gift (Romans 5:15–16, Ephesians 2:8–9), but you can earn rewards after you are saved, and it is also possible to lose rewards (see I Corinthians 3:11–15, Colossians 2:18, II Timothy 2:5, II John 1:8, and Revelation 3:11). Rewards are based on many different things. “And whosoever shall give to drink unto one of these little ones a cup of cold water only in the name of a disciple, verily I say unto you, he shall in no wise lose his reward” (Matthew 10:42). The Bible tells us God will pass out five different types of crowns when we arrive in Heaven, plus other types of rewards. The best part is that rewards are given by an impartial Judge who makes no mistakes.
Some believe crowns to be symbolic and not literal, but in the book of Revelation, the twenty-four elders in Heaven have literal crowns that they lay down at our Savior’s feet. It is possible to earn more than one crown, and when Christ returns, He has “many crowns.” History tells us a story about two Egyptian kings, one from the north and one from the south, who battled each other. The one who conquered the other took both crowns, combined them, and fashioned one new crown. Perhaps something similar will happen if you earn more than one crown: Christ will create a single crown with parts from the different ones.
As any parent knows, if you give out candy to your children, you must make sure there is enough to go around, or someone will cry or there will be a fight. We may pretend that rewards and crowns are not important to us, but I have not yet been able to talk anyone into giving me their rewards when we get to Heaven. The point is, you will want whatever Jesus Christ is passing out, including rewards. There will be some who receive rewards, and some without rewards, and there will be some given praise, and some without praise (Luke 19:16–22). I do not believe we will be punished in Heaven, for all our punishment was received by Christ on the cross. But there will be shame when Christ returns for His own. “And now, little children, abide in him; that, when he shall appear, we may have confidence, and not be ashamed before him at his coming.” (I John 2:28). The term “little children” was used by the Apostle John for believers and he said some would have confidence, and some would be ashamed.
And it appears one way we will worship Him throughout all eternity is to lay at His feet rewards that He helped us earn, as the twenty-four elders do in Revelation 4:10.
“Must I go, and empty-handed,
Thus my dear Redeemer meet?
Not one day of service give Him,
Lay no trophy at His feet?
(Charles Carroll Luther, 1877)