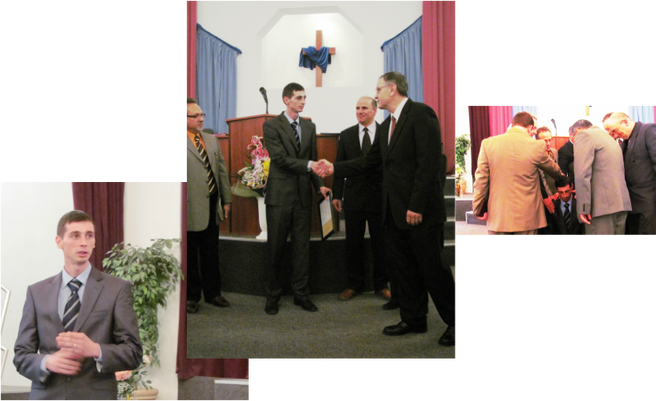 ​
HE  THAT
DESIRES
TO SERVE GOD

Ordination
How do I know if I am called to serve God?
The great love of my life has been being a missionary. Of course, God has not called everyone to be a missionary, but if we don't go, we should send our prayers and financial aid—this would be for both foreign countries and in our own state. Mark 16:15 says, “Go ye into all the world and preach the gospel to every creature.” The apostles did this by going out and winning people to Christ and leaving them formed into churches, so they could carry on this great work after the apostles were gone. Jesus started a church, and the apostles started churches. They did not start schools or hospitals. One might think, “But we need those.” Yes! And I am thankful for those who have helped start them and keep them going. I believe they are a natural outgrowth of a Christian community. But Jesus Christ and the apostles only started one thing: churches! Jesus loved the church and gave Himself for it (Ephesians 5:25). Don't get sidetracked doing something else, even a good thing, if God has called you to do what the apostles did.
The reason the church is here today is because Jesus Christ promised perpetuity to His church, that it would remain until the end of the age (Matthew 16:18). It's rare for something to last more than a hundred years. A few businesses have lasted longer than that, and some countries have lasted a few hundred years, but the church has been here for two thousand years! And that without a president, parliament, constitution, army, or country. A lot of people are giving their lives for some club, political party, or activity. And these in themselves are not wrong, but I am not going to give my life for them. They were started by man and will die with man. Get involved in something that God’s Son started and promised to watch over. He also promised to help you do it: “Faithful is he that calleth you, who also will do it” (I Thessalonians 5: 24).
“But the Lord could come back now!” Some believe the Lord’s return is very near. Although I don’t know when, I hope it’s soon. But to use the soon return of our Lord as an excuse not to serve Him because “I won’t have time to do anything” is missing the point. If the Lord should come back now while we are starting churches, then we are doing what we should be doing. When Christ returns, I don’t want Him to find me at home wasting my time (Ephesians 5:16–17).
God blesses the direction you are going in. When He comes back, you will have joy because you left point A, even if you have not arrived yet at point B. Has God called you? If he has, He is still calling. “For the gifts and calling of God are without repentance” (Romans 11:29). If Christ came back today, where would you want to be found? On your way to Nineveh, or in the belly of a fish (Jonah 1:2–17)? Does God expect something of you, but as of yet you have not said, yes? In Matthew 20, Christ gives a parable of a man hiring laborers to go into his field; some were called in the “eleventh hour.” Christ said, “Are there not twelve hours in a day?” That means some were called with only an hour left, and by the time they got to the field, who knows how much time was left. But the Bible says they were paid as much as the others. God’s Son is calling laborers into His field to help carry out the Great Commission and will continue to call, even in this eleventh hour! And sometimes, He will call in the eleventh hour of our life, when we are old. Moses was called when he was eighty years of age to go back to Egypt and lead God's people out of bondage.

Ever Christians is to be the light of the world for Christ, and some have been called to leave their jobs and go into full time service!
If you are interested in the ministry please see "WORK DIARY I and WORK DIARY II." Under "TRUE STORIES II."
Please read our other short stories at the top of the page
and pray for this website to be used of God and to help Christians!​
Was Phil Robertson of "Duck Dynasty" judging?